Have you tried Lanzarote’s Janubio salt yet? This amazing Canarian salt is our first gastronomic addition to our online shop.

On the Southwest coast of Lanzarote, at the foot of the volcanic National Park of Timanfaya and exposed to the strong sun, waves and wind, the Janubio salt crystals are obtained, using their traditional artisan salt beds that date to 1895. The manual elaboration process creates an amazing landscape that represents an authentic salt garden, and both the artisanal process and the business have been passed down for generations, keeping the enterprise family owned to this day.

Salt is the oldest and most used additive in the cookery of almost all cultures, becoming an important pilar in our nutrition.  It is sometimes referred to as “white gold”, and it was one of the main motors for Lanzarote’s economy. But unfortunately, as it is strongly connected to the fishing industry, whose demand has declined due to refrigeration, the Lanzarote salt production has also declined, producing only 2000 tons per year in comparison to the 10000 tons in the past.

Like most food and beverage industries, the salt industry has grown and began to abandon its traditional methods, and that is why Salinas de Janubio S.L. has worked hard to keep the traditional methods alive by maintaining and restoring their facilities while searching for commercialization channels. The production and commercialization of the salt has always been loyal to artisanal methods, not allowing any mechanization, like many other industries. They also prioritize the cleanliness of the products, making sure there are no microplastics in them.

This cleanliness is part of what makes Janubio salt so special. Although the mills themselves have a red tone to them due to their historic crustacean inhabitant, Artemia, this salt is highly appreciated in the gastronomic culture due to its amazing cleanliness. While in the South of Spain the salt gets mixed with the natural soil, giving it a brownish white colour, Janubio salt is a lot cleaner, and has a bluish white colour. 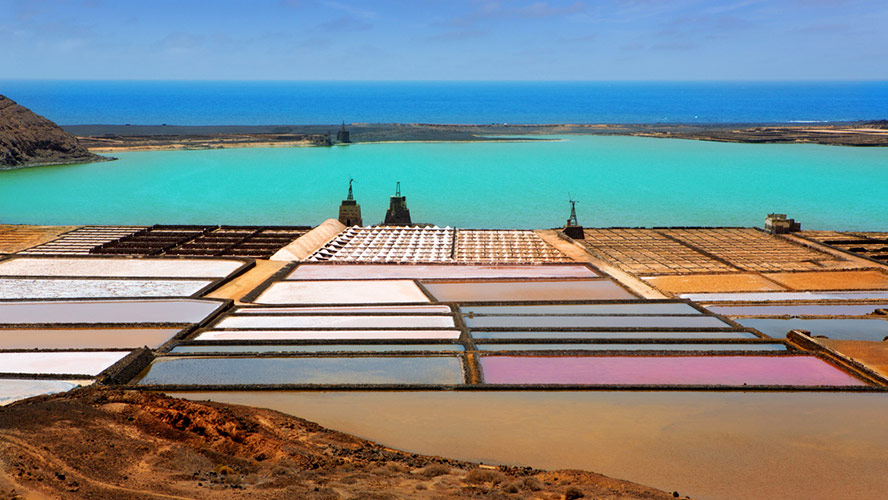 The marine and volcanic nature of the island adds an exquisite flavour that speaks to the high quality of the salt. The salt is obtained from the lagoon in front of the salt flats. This lagoon was formed due to the volcanic eruptions of Timanfaya between 1730 and 1736 that created a barrier of lava that protects the lagoon from the strong sea. Its’ circumference is of 1000 metres, and it is 3 metres deep. La Laguna de Janubio (the Janubio lagoon) is a very important place on the island. The area is home to many rare marine and bird species, and its considered a Point of Geological Interest, a Special Protection Area for birds and also Site of Special Scientific Interest (SSSI). The Salinas are the most important landmark and emblem of the salt culture in the Canary Islands, being the biggest and of most landscape value of the 8 islands and one of the most important salt mills worldwide.

Today, Salinas de Janubio have substituted windmills for electrical pumps in the process of pumping water into the lagoon, to obtain the best salt possible. The salt is later packed at the Bodega, an old building restored during the 90s that sits at the foot of the salt flats. This is also the first selling point of the salt, where you can find all the Janubio salt varieties and begin – and end a guided tour.

What are you waiting for?

You can purchase this amazing salt at our online shop, which is based in the UK and also selling into Ireland and the EU.